Well, while my niece is living it up with Kid Rock in Spain 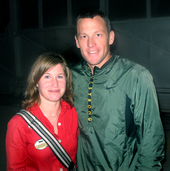 (USO Christmas Show–some great photos of her and the Kid, Lance Armstrong, Robin Williams) I spent the morning fielding off one gas company from taking my tanks away while trying to find out when the new one would be bringing theirs in.

I’m sure the guys laughed their asses off by my fighting stance and demeanor and I did simmer down but would not let them touch the tanks and made them relight the pilot for the heater before they left.  Within a half an hour, the other company came and started making the switch.  Of course they had a leaky tank and had to bring in another one.  I ended up without heat for a couple hours which is about an hour longer than it took to get the shop back to outdoor temperature.

Toasty now.  And a lot less grumpy and disheveled.

Gotta share one of Erica’s notes on the images (she had to play gopher for the celebs): “Lance Armstrong – I couldn’t resist commenting that I did the Ronda 101K mountain bike – I am such a loser…”

2 Responses to REALITY?: The Propane Wars